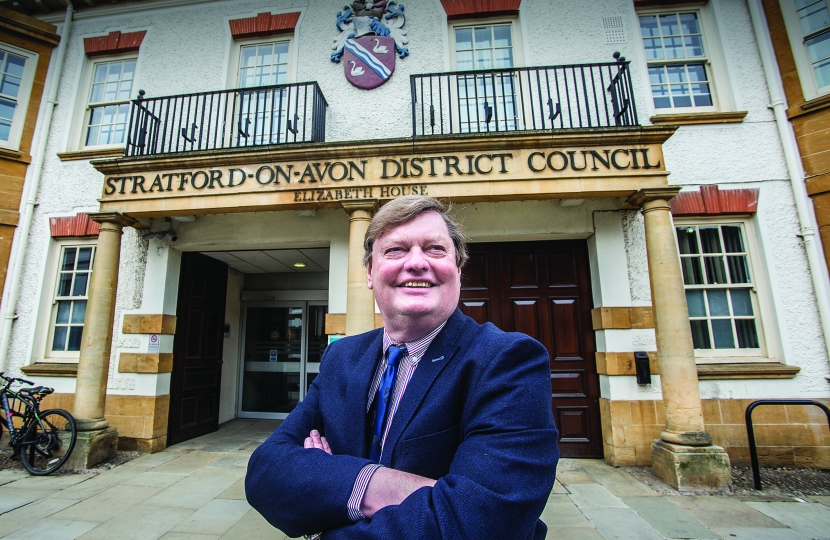 This is a longer version of the Leaders Column that appears in “The Herald”. It gives me the opportunity to give more background on what we are doing.

I really am glad it is August and things are easing off a little. It has been very full on since March and the weariness and tiredness is obvious in everyone.  This applies to Councillors, particularly Cabinet members, and officers alike.

We have received £1.5 million in funding for the Riverside corridor project. This gives us the opportunity to create something that will make a huge difference to Stratford and significantly help our recovery. Given the scale and our ambitions for the project it will not be completed in one go. The opportunities this presents will help reshape the Town and open up new opportunities.

The Henley Street project is now complete with the erection of a statue to Shakespeare, and the whole place looks very attractive. Our capability to deliver projects on time and within budget has raised our credibility with the CWLEP. A track record of delivery is vital in increasing the chances of success in future bidding rounds.

We were also heartened by the news that Lotus are basing some of their operations on The University of Warwick Wellesbourne campus. This is only the start of the development of the campus and it will, over time, create good jobs and help diversify our economy.

I think that all of these initiatives are a pattern for the future, investment will not come directly through local councils, whether District or County, but will come through other bodies, such as CWLEP. This puts an ever greater premium on networking and representation on these bodies. Our efforts over the past two years are bearing fruit. The networking is time consuming but it is paying dividends. It is also an illustration of how the demands on councillors have increased.

The importance of investment is underlined by the fact that in July there were 19.800 people on furlough in the District and, in June, 5,500 people on the self-employed income support scheme. I have real concerns about what is going to happen when these schemes end, and it is one of the main reasons why economic growth and inward investment is so high on our agenda.

We have yet to hear the details of the third round of government funding for local authorities, but we have prepared as far as we can so we can react quickly when we receive the details. Meanwhile we are progressing with some immediate cost saving initiatives.

On local government reorganisation, all the Districts and Boroughs in Warwickshire have now commissioned a piece of work by Deloittes to explore all the options available.  We are also, jointly, beginning a consultation exercise with residents to better understand their preferences. We expect the results early in September.

Meanwhile, we are progressing the joint working with Warwick District Council. Two management team roles will be shared by Warwick and Stratford. The first will become operational very swiftly and the advertisement for the second has now been placed.

We await the White Paper on local government reorganisation with interest. We now believe that, at best, any reorganisation, including Warwick and Stratford Districts  will not be completed before 2023.

There is work ongoing with the Local Government Boundary Commission on the number of councillors and the ward boundaries in Stratford on Avon District. I think there is a general acknowledgement that 36 is too few councillors to run an effective council given the way in which workload has increased over the past few years. This is reinforced by the comment of one councillor, re-elected after a lengthy absence has commented on the increased level of work. Lib-Dems are often surprised when they come into contact with reality and this is a perfect example. It is recognised that local government reorganisation may overtake this piece of work, but the Boundary Commission assure us that the work will not be wasted.

In Stratford upon Avon a great deal of time and effort has been spent on the vexed issue of road configuration. There have been very obvious tensions, the view of many businesses that the restrictions were having a negative impact on their trade and the need for people to have sufficient space to feel safe. Finally a compromise was reached which appears broadly acceptable. Although highways issues are, strictly speaking, a WCC responsibility the fact that we got stuck in to help resolve the issue demonstrates our “can do” attitude to tackling challenges.

As you can see, we have been busy and it is not surprising that we feel tired and weary. We all feel that we have done the best we can in very challenging circumstances. Not only have we managed a crisis well but we are also laying strong foundations for the future.

One thing we are finding that this crisis is doing is exposing those organisations and individuals responding positively to the challenges from those that are less proactive and responsive.

Today we have published our Covid-19 UK Vaccines Delivery Plan, setting out how we plan to deliver the biggest vaccination programme in British history, to protect all those who need it most as quickly as possible.