Conservative Member of Parliament for Stratford-on-Avon

Nadhim Zahawi was born in Baghdad to Kurdish parents in 1967. His family immigrated to the UK when he was 9 and he grew up in South West London and rural East Sussex. A lifelong entrepreneur, in 2000 he founded YouGov, a leading market research company which has since become famous for the accuracy of its polling data. In 2010 he was elected MP for Stratford-on-Avon.

Local schools are a major priority for Nadhim. He has helped deliver a better funding deal for Warwickshire schoolchildren and is currently pushing for a new special school at Welcombe Hills. Many of his constituents are concerned about uncontrolled development and he has campaigned hard to make localism work for local people.

His priorities since 2015 have been improving the local business environment for small firms and independent shops, continuing to fight to protect Stratford’s unique character and keeping the surrounding villages sustainable through measures like rural broadband and better infrastructure.

In 2020 he was also appointed as a Parliamentary Under Secretary of State at the Department of Health and Social Care and has recently been appointed as the Vaccines Minister, working on the UK's successful vaccine rollout. Under his direction the vaccine rollout proved to be one of the most successful in the World with the UK vaccinating much faster than anywhere else in Europe under an independent scheme.

In September 2021 Nadhim was given his first Cabinet level appointment as Secretary of State for Education. 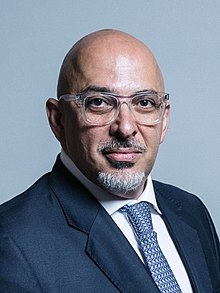